i/ˈluːiːvɪl/ by others) is the largest city in the Commonwealth of Kentucky and the 30th-most populous city in the United States. It is one of two cities in Kentucky designated as first-class, with the other being the state’s second-largest city of Lexington. Louisville is the historical seat and, since 2003, the nominal seat of Jefferson County.

There’s plenty to do in a town like Louisville. So much so, we like to call ourselves “Possibility City.”

Famous for the Kentucky Derby, Louisville is steadily gaining notice for its other assets. A revitalized downtown includes an entertainment district and Riverfront Park. Woman’s Day named Louisville one of Three U.S. Cities Get Healthy, and prospective students can choose from more than 30 colleges and universities. A true arts town, Louisville boasts an orchestra, resident theater and numerous museums including the Louisville Slugger Museum and Factory.

Today, the city is known as the home of the Kentucky Derby, Kentucky Fried Chicken, the University of Louisville and its Louisville Cardinals athletic teams, Louisville Slugger baseball bats, and three of Kentucky’s six Fortune 500 companies.[12] Its main airport is also the site of UPS’s worldwide air hub.

Named the “14th Best City for Business and Careers”.

Louisville today is home to dozens of companies and organizations across several industrial classifications. However, the underpinning of the city’s economy since it earliest days has been the shipping and cargo industries. Louisville’s importance to the shipping industry continues today with the presence of the Worldport global air-freight hub forUPS at Louisville International Airport. Recently, Louisville has emerged as a major center for the health care and medical sciences industries. It has been central to advancements in heart and hand surgery, as well as cancer treatment.

Louisville for a long time was also home to the Belknap Hardware and Manufacturing Company, at its peak one of the largest manufacturers and wholesale distributors of hardware in the United States, as well as Brown & Williamson, the third-largest company in the tobacco industry before merging with R. J. Reynolds in 2004 to form the Reynolds American Company. Additionally, Louisville is a major center of the American whiskey industry, with about one-third of all bourbon coming from Louisville.

Louisville also prides itself in its large assortment of small, independent businesses and restaurants, some of which have become known for their ingenuity and creativity. In 1926, the Brown Hotel became the home of the Hot Brown “sandwich”. A few blocks away, the Seelbach Hotel, which F. Scott Fitzgerald references in The Great Gatsby, is also famous for a secret back room where Al Capone would regularly meet with associates during the Prohibition era. The drink the Old Fashionedwas invented in Louisville’s Pendennis Club. 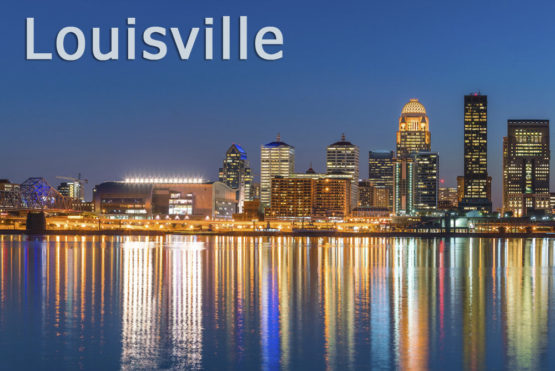