In the 2010 ACCRA Cost of Living Index, Knoxville was rated 89.6 (the national average was 100). Kiplinger ranked Knoxville at #5 in its list of Best Value Cities 2011 citing “college sports, the Smoky Mountains and an entrepreneurial spirit.” In April 2008, Forbes magazine named Knoxville among the Top 10 Metropolitan Hotspots in the United States, and within Forbes’ Top 5 for Business & Careers, just behind cities like New York and Los Angeles. In 2007, there were over 19,000 registered businesses in Knoxville. The city’s businesses are served by the 2,100-member Knoxville Area Chamber Partnership. The Knoxville Chamber is one of six partners in the Knoxville-Oak Ridge Innovation Valley, which promotes economic development in Knox and surrounding counties.

Knoxville is home to a rich arts community and has many festivals throughout the year. Its contributions to old-time, bluegrass and country music are numerous, from Flatt & Scruggs and Homer & Jethro to the Everly Brothers.The Knoxville Symphony Orchestra (KSO), established in 1935, is the oldest continuing orchestra in the southeast. In its May 2003 “20 Most Rock & Roll towns in the U.S.” feature, Blender ranked Knoxville the 17th best music scene in the United States. In the 1990s, noted alternative-music critic Ann Powers, author of Weird Like Us: My Bohemian America, referred to the city as “Austin without the hype”.

The University of Tennessee’s athletics programs, nicknamed the “Volunteers,” or the “Vols,” are immensely popular in Knoxville and the surrounding region. Neyland Stadium, where the Vols’ football team plays, is one of the largest stadiums in the world, and Thompson-Boling Arena, home of the men’s and women’s basketball teams, is one of the nation’s largest indoor basketball arenas. The telephone area code for Knox County and eight adjacent counties is 865 (VOL). Knoxville is also the home of the Women’s Basketball Hall of Fame, almost entirely thanks to the success of Pat Summitt and the University of Tennessee women’s basketball team. 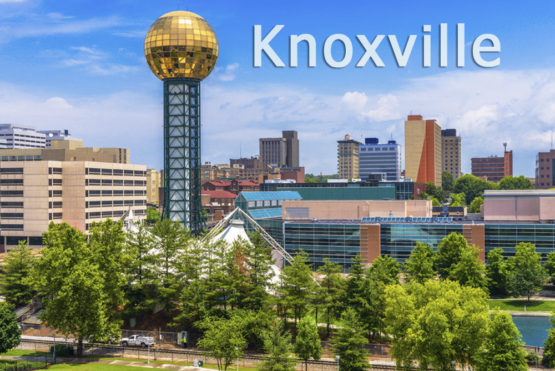